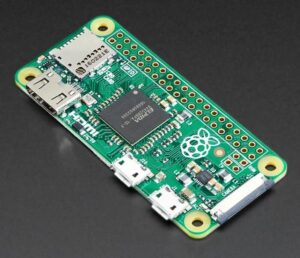 For many, artificial intelligence (AI) is perceived as a topic that is unapproachable or confusing. Google’s AIY kits, made up of both the Vision§ and Voice§
kits, aim to remedy these perceptions by introducing AI as being user friendly – regardless of technological fluency or experience. In particular, the Google Vision Kit (sold for $100)§ utilizes a camera that is the mode of input for projects § that serve a variety of purposes. This is done quite simply with a short list of included materials § that contain cables, cardboard, and buttons. In turn, users are able to create programs that can recognize and react to a variety of objects as they are placed in front of the kit’s camera.

With both the Google Voice Kit and Google Vision Kit, AI becomes a much more approachable and usable concept. Both are powered by a Raspberry Pi Zero§ – a tiny computer whose functionality is customized by the programming that is written to control it. Alongside the Raspberry Pi, the Vision Kit also includes a small camera, wires, and cardboard sheets. Using the directions included with the Kit§, a small box is constructed. The Kit can then be connected to the internet by downloading the AIY Projects app or by connecting to a computer monitor§.

Regardless of which option is chosen, users will be offered resources to try various projects and demos4. There are a variety of projects§ to choose from. For example, the default project – named the Joy Detector§ – is able to detect whether the person in front of the Kit’s camera is smiling or frowning, resulting in the Kit’s button to light up yellow or blue, respectively. This relates to the concept of machine learning§ within the realm of AI. where AI can function with more potential when it is essentially “taught,” or introduced to, more information. The more information that the AI is exposed to, the better it is able to function.

Another project, titled Image Classification,§
makes it so that the button located on top of the Kit lights up when an object is recognized as being in front of it. It then guesses what the object is out of a database of one thousand objects.

Google offers several other resources§ that can teach users about topics related to artificial intelligence, including courses, podcasts, guides, and interactive content.

Examples in the labs

The IgnitED Lab offers access to Google AIY Vision kits that are already built as well as fresh kits that are available for students to construct themselves. Furthermore, the use of Raspberry Pis means that there are a plethora of options outside of direct use for the AIY kit.

The Vision Kit is a useful introduction to the world of computer programming. Having knowledge of such skills is considered more and more relevant as the world continues to progress technologically at a very quick rate. The Vision Kit is therefore highly relevant in emphasizing Science, Technology, Engineering, Mathematics (STEM) skills to students of all ages.

In addition to applications that might be considered specific to the Google AIY Vision kit, the potential associated with the “brain” of the kit, the Raspberry Pi, should be noted as well. This tiny computer can be programmed to do millions of functions. Thus, if an instructor was interested in learning, and then teaching students, how to use the Pi included in the kit to record the amount of rainwater collected in an area, for example, the Raspberry Pi would be capable of doing so. Google has prepared for such projects by creating guides and resources that help point users in the right direction to get their coding project started. The possibilities are truly endless, and up to the user’s imagination, with the power of the AIY Vision Kit.